The GERI Toolbox is a solution that can help municipal home care nurses – in collaboration with general practitioners – to offer proactive and comprehensive care to elderly citizens. The aim is to catch deterioration in health before an acute admission to hospital becomes necessary.

The GERI Toolbox is a physical kit containing mobile test equipment for health examinations. The GERI Toolbox is used by nurses from the local home care services who have been trained specifically in using the equipment. During a home visit to a patient, the nurse brings a GERI Toolbox and performs clinical readings based on the symptoms of the patient. The data recorded during the visit are directly transferred to a joint IT platform that can be accessed by both the home care nurses, the general practitioner and in time also by the hospital geriatricians. The goal of sharing the information is to reduce risk of misunderstandings and provide a better basis for decision-making for further treatment. 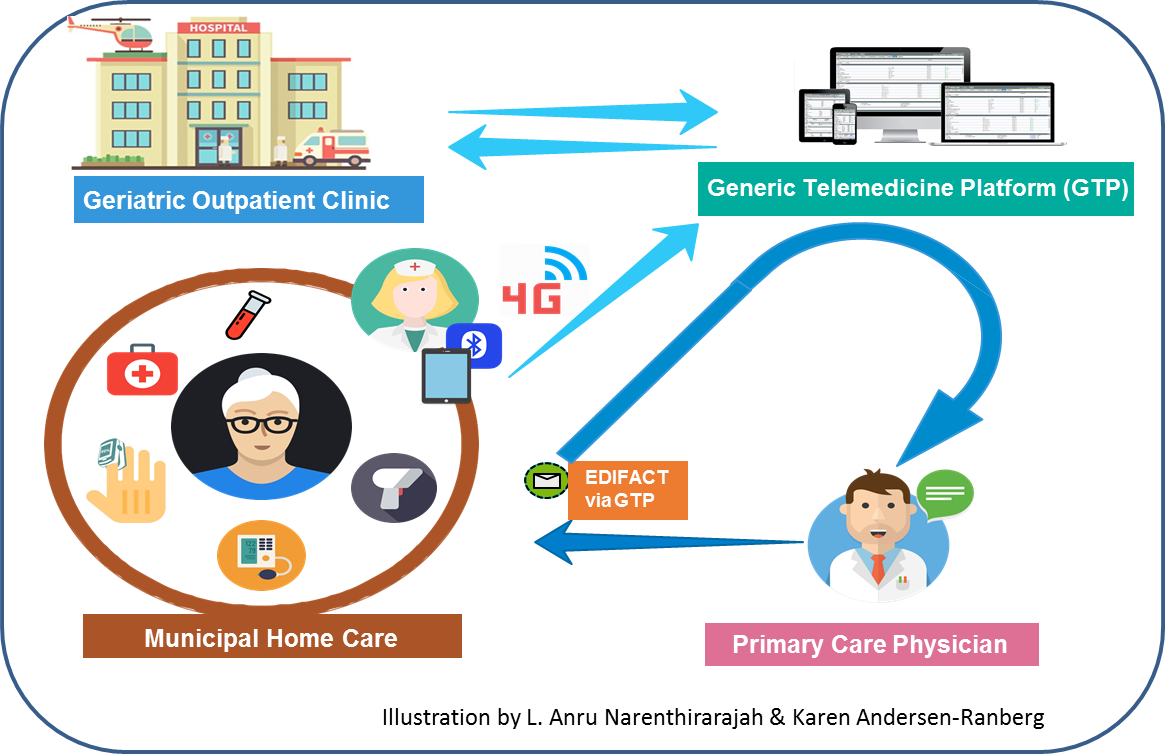 The goal of the GERI Toolbox and its digital technology was to simplify communication between the municipal home care and the general practitioner and contribute to better collaboration across the sectors for the benefit of elderly citizens and patients.

Overall, the hope for the GERI Toolbox was that it would increase both the quality of care, quality of life and have a positive economic impact for both hospital and municipalities.

In total, 1559 citizens participated in the project. The median age was 83 years; men accounted for 43%. During the project period, a large number of clinical samples were taken, including approximately 10,000 blood samples for assessment of fluid numbers, infection numbers and hemoglobin numbers.

The electronic platform did not function optimally during the project, as it did not succeed in communicating with the systems of the participating municipalities and general practitioners. Despite this, the project has shown a wide range of strengths and the GERI suitcase is still in operation.

Interviews with the project participants showed that all parties (emergency nurses, citizens and general practitioners) were satisfied with the GERI suitcase and the examinations in their own home. All four project municipalities continue to use the solution, and several municipalities are in the process of implementing the solution in their emergency teams.

Interviews with the emergency nurses showed that the project’s activities were of great importance on several points:

Citizens were also satisfied with the new initiative:

General practitioners were also satisfied, although less than half (n = 49 out of N = 110 possible) answered a short questionnaire: While 96% of the respondents themselves had taken the initiative to ask the emergency nurse to drive out to a patient and assess the clinical situation, 82% found the GERI suitcase helpful. Approximately 2/3 (67%) thought that the GERI suitcase had contributed to the fact that they admitted fewer patients.

The Danish Health Authority’s assessment of the GERI Toolbox has been published and concludes that it is implemented to a certain extent and holds the potential to benefit the relation between hospital and municipalities and partly the general practitioners.

The assessment was carried out on the basis of a shared assessment design for the eleven different projects in the public pool of funds for weak elderly citizens. Therefore, the project will be assessed with a tailored design based on the model MAST. The extra assessment is financed with regional funding which also finances the launch of the GERI Toolbox in the remaining municipalities on the island of Funen and an online forum for knowledge sharing. This extension of the projct continues through 2022.

The GERI Toolbox is a mini-laboratory. The toolbox contains equipment and devices for point-of-care testing with rapid response feedback such as blood pressure apparatus (sphygmomanometer), a bladder scanner, a scale and equipment for blood sample analysis.

“GERI” is an abbreviation of geriatrics – the science of diseases occurring in old age.

Read more on the project’s homepage.

The GERI Toolbox sprung from the project PAATH which performed initial tests on the equipment and organisational structures.