The desired outcome from this project was to reduce the number of acute admissions of patients with atrial flutters as well as study the possibility of replacing the monitoring during admissions to the hospital with monitoring at home.

The method was the so-called “e-patch”, that was named ePatch®, which was able to perform wireless measurings of the cardiac rhythm in the patients’ private homes, making admissions to the hospital unnecessary.

The project consisted of two phases. The aim of the first phase of the project (2009-2012) was to develop an operational prototype, which would replace the monitoring during admission to the hospital with home monitoring. This would provide the patients with a greater feeling of freedom and release resources at the hospital.

By continuous measurings directly on the body in the home of the patient, the hospital can retrieve critical data through both stethoscopy and cardiac rhythm. The measurings provide continuous indications of deterioration and allow endeavours early on. Furthermore, the patient is given a better insight into the disease and is involved in both diagnosis and treatment.

The first phase included development and testing of the technology at Odense University Hospital and demonstrating the aspired effect – clinically and financially – without reducing the patient’s experience of their course.

Phase two consisted of large clinical testings for the validation of the potential of the technology and the initiation of working with implementing the ePatch® in the daily operations of the hospital as a permanent offer for the citizens that need to be monitored for possible atrial flutters.

The first phase ended in 2012. Phase two is still working on the analyses. 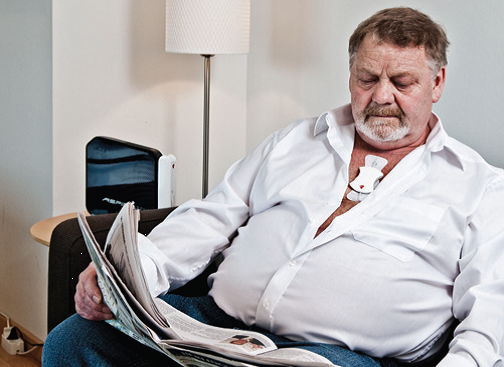 ePatch® is a form of large, electronic patch that is carried on the body. Censors in the patch meassure and send data to a portable recipient, which sends data to the systems of the hospital. All in all, the patch functions exactly like a regular heart monitor electrode – just wireless.

The first phase of the project was funded by DKK22.8 mio by the ABT Fund (now: Fonden for Velfærdsteknologi), which was distributed to the firm of Delta Electronics, who developed the ePatch® technology i collaboration with heart specialists at the hospital and innovation consultants from CIMT.

The second phase of the project was funded by Fornyelsesfonden (now: Markedsmodningsfonden) and means from the [email protected] project.